A month or so ago James began publicizing to our church a "Saturday After Thanksgiving Hike" at Ramsey Canyon. He didn't require people to sign up or anything, just kept it low key. So on our way to the trail head Saturday morning I asked him how many people he expected to show up. He really had no idea.
Since the weather was a little gloomy, cool and cloudy, and he hadn't heard a firm "We'll be there!" from anyone, I half expected no one to show up. And, while that certainly wouldn't have been ideal, it would have been ok. We love to hike period. But I was hoping at least a few people would be hiking with us.

But as we drove into the parking area we were met by over a dozen folks from our church and after we got there ten more showed up. We ended up with 27 people hiking the approach path and 23 doing the whole 5 mile loop! What a blast! Hiking with these friends from our church family was one of the neatest hikes I've ever been on. 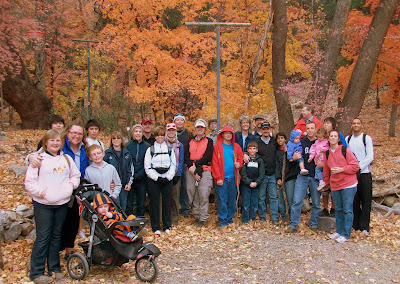 Our hiking group was comprised of young couples, families with preschoolers, families with school aged kids, teenagers, college students, and slightly older adults. Most were fairly experienced hikers, but a few hadn't hit the trails in a while. It was an amazing representation of our church family. And that's just what it felt like that day...family. 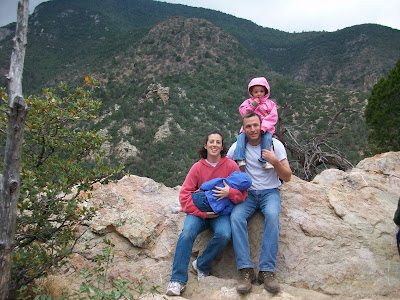 We set out on a 2.5 mile in and 2.5 mile out hike to the Hamburg mine, deep into Ramsey Canyon of the Huachuca mountains. We set up a few check points where we would all count heads and make sure everyone was ok, and off we went.

The first section of the hike is a very pleasant approach trail. Right off the bat we saw three deer and trees laden with multicolored fall leaves - orange, red, yellow, and green. Yes, we do have a true fall here in southern Arizona. You just have to go hiking in the mountains to see it! 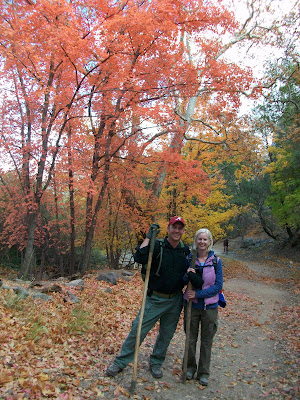 But immediately following the approach trail, we got our full indoctrination into mountain hiking. Switchbacks. I hate that word! Probably only a quarter of a mile, but it seemed like miles. Not only were the inclines steep, but the elevation is well above 4,500 feet here and you have no time to adjust to the thin air as you go up, up, up. But fortunately once you get up this series of switchbacks, the hike becomes a much more enjoyable trail of gradual ups and downs.

The switchbacks lead to a couple of open vistas where you can see for miles, and then you head down into the green crevices of the canyon. This is where a beautiful babbling brook feeds the foliage year round and the wind whistles among the tops of the trees. I bet many people who live right here in southern Arizona have no idea that such a place exists just miles from their homes. It's absolutely magical. You leave behind the sandy dirt, the cacti, and the rock formations and suddenly you're in an enclosed forest carpeted with moist, black dirt and green moss.

Well enough of the scenic descriptions. Let's move on to the adventure of it all. The funny thing about this hike was how indicative it was of our human nature. You see, some set off at a fast pace, but took a few wrong turns and had to be retrieved later on by those who knew the trail a little better. Some were more winded by the climbs than others. A few were taking care of young children as they hiked the trail, even carrying babies in their arms for the duration. Some were more intent upon covering ground quickly, while others paused to look up occasionally, soaking in the views. A few took snapshots along the way. Others posed for the pictures and depended on those with cameras to pass the photos along later. Most all of us missed a turn or two and had to detour back to the right path.

I don't think I've ever hiked with 20-something people before. And if you're a serious hiker who's trying to get some miles under your belt, you might have no desire to ever join such a group. But I thoroughly enjoyed our massive group hike, and besides the laughter, and good conversation, and beautiful scenery, here's why.

Our hike reminded me that while Jesus calls us to get off the beaten path and take the one less traveled (as in Matthew 7:13-14), He never intended for us to hike it alone. He says, "few are those who find it," but He doesn't say you'll be on it all by yourself. The sold-out, committed Christian walk can get lonely at times, but no believer should have to feel like a lone ranger.

Jesus himself gathered a group of men to walk with Him. Isn't that interesting? Have you ever considered how different our take on the Messiah would have been if He had been the lone ranger type? What if the gospel portrayed Jesus as this solitary kind of guy who had slipped into one village after another all alone, mysteriously appearing on the scene and just as mysteriously exiting, like a dark shadow disappearing each night? What if he had been an elusive and evasive loner type?

But He wasn't. Jesus walked in relationship with others. He asked others to walk with Him, even when He knew they might slow Him down a little here, take a wrong turn there, or argue about how to read the map there. He had to deal with some knuckleheads, that's for sure. But while He definitely took the lead, He never gave up on His buddies. He was on a group hike and he took that group of 12+ all the way to His destination.

Let's face it, sometimes we're tempted to just do this thing by ourselves. We think people complicate things, slow us down, get us lost, distract us. Maybe you're the kind of person who likes to cover a lot of territory quickly and those who keep snapping pictures on the way frustrate you. Or, conversely, maybe you're into enjoying the scenery and those speedy guys tend to push your buttons. Whatever your "hiking style," God intends for you to do this path in the company of others - namely His church.

Are you trying to walk the believer's path on your own? No matter where I've lived, I've come across Christians who are stubbornly avoiding the church. Some tell stories of getting burned by the church some time in the past. Others say they're just passing through, won't be here long, so they don't bother to engage in a local church. Still others say they are putting their family first and just don't have time for church. I'm sorry folks, but the truth is that none of those excuses are biblical. They just don't cut it.

The church is not some neat organization that you join if you're the joining type. The church is the bride of Christ, His beloved, His family, His body. Jesus created the church (see Matthew 16:18), called it His, and died for it.

Sure, sometimes I get a little frustrated with the church too. As a pastor's wife I've seen it all - the good, the bad, the glorious, and the ugly. But because Jesus built it, I'm sticking with it. Not only that, I'm determined to love it.

If you're not a part of a local church family right now, I encourage you to pray about that, then ask around and find you a good, friendly, Bible-preaching church to attend this Sunday. But don't stop there. Don't just go to church. Join the church. Be a part of the family.

If you're already a part of a church family, think about your role in that family. Thank God for those who help you get back on the path when you take a wrong turn. Appreciate those who remind you to pause and enjoy the scenery. And enjoy every step you take alongside those fellow believers. You may be off the beaten path, but at least you're not alone! 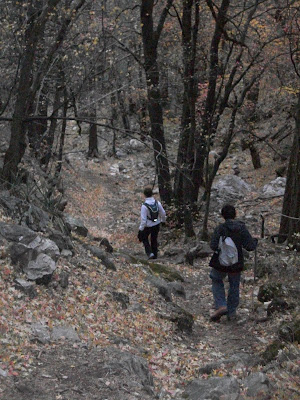