Our Journey to Bethlehem - Day 10 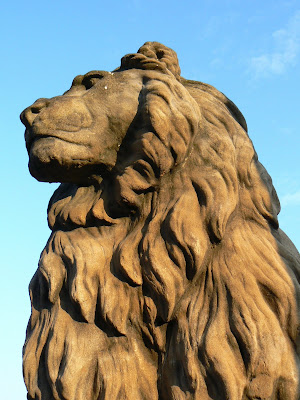 I'm one of those people who likes to find out what everyone else at my table is ordering at a restaurant before I decide what to have for myself. I can look over the menu and nothing looks all that great, but as soon as anyone else chooses to order a certain dish, that item suddenly appeals to me. Are you like that too? What is it about us that makes us want what someone else has? I can totally be in a no-meat kind of mood and scanning the salad choices, but when my friend looks up from her menu with a decisive smile and announces, "I'm having the 1/3 pound burger with cheese and mushrooms!" suddenly I'm craving juicy red meat!

That's exactly what happened to the Israelites. No, they didn't suddenly all crave hamburgers, but they did want what everyone else around them had. They wanted a king!

As we continue our journey to Bethlehem today, we come across the elders begging Samuel, the judge over all of Israel, to appoint them a king. In fact here is what they said,

Samuel wasn't pleased with this request. Not only did he feel like they were stepping outside of God's will for them, but his feelings were hurt. But God, who had dealt with the offensive nature of the Israelites far longer than Samuel had, told him,

"Listen to the voice of the people in regard to all that they say to you, for they have not rejected you, but they have rejected Me from being king over them. Like all the deeds which they have done since the day that I brought them up from Egypt even to this day--in that they have forsaken Me and served other gods--so they are doing to you also." (1 Samuel 8:7-8)

And so, the Lord allowed the people, His people, to have a king. But He warned them. It wouldn't be as nice as they thought it would. Their sons would be sent to war in the king's army. Their daughters would be enlisted to work in the king's palace. Their fields would be taken to grow his grapes and olives. And don't forget about taxes. He'd take a tenth of their seed and use their servants to plant his crops.

More importantly, God would not play second fiddle. He would not come running to their rescue when their king did not lead them well. (1 Samuel 8:18) If they had an ungodly king, God would deal with the people accordingly.

Did they still want a king? Yes. Because at least they'd have what everyone else around them had.

As you know, Israel would have some good kings and some bad ones. More bad ones, by far. While we often immediately think of David when we think of the King of Israel, King Saul was the first king appointed for the people. He was chosen based on those superficial, exterior kind of qualities that so often appeal to people. He was handsome, tall, from a good family, etc. But he would later reveal his true nature. He was conniving, melancholy, distrustful, disloyal to God, and easily provoked to jealousy.

David was chosen to be king because he was "a man after God's own heart." And indeed, David was mighty in battle, soft-hearted toward His God, loyal to God's plans, good to his people, and just. But even David had problems at home. He committed adultery and murder, and his children were wayward and confused.

Solomon was wise and wealthy. He had the privilege of building the Temple of God in Jerusalem, where God's presence dwelt among the people. Royalty and wise men from far away lands would visit Jerusalem during Solomon's reign to view his wealth and gain from his wisdom. But it all went to Solomon's head and he married far too many wives from far too many different nations and they pulled his heart away from God.

After Solomon's reign the kingdom of Israel split in two. Now two sets of kings would rule over God's chosen people - a divided kingdom. Neither would fare well and often these kings were their downfall.

Before we get too academic today, let's pause for a water break and think about what we've gleaned from this portion of our trip. Why did the people want a king? They said it was because they wanted to be like those around them, but what specifically appealed to them about these foreign kingships?

Something in us wants someone to be in charge who rightfully sits on the throne. We want to be ruled well by one who knows what he is doing, who cares for his people, who has a plan and knows how to carry it out, and who owns the cattle on a thousand hills. And, while most of us would only dream of getting to eat from that king's royal table, we at least want to envision the grand balls that he would surely throw and some would attend.

Well, the people of Israel would never know that kind of king. Instead they would eventually be taken captive by foreign kings who would rule them instead, often treating them cruelly. And on the night that little baby was born in the City of David, they would still be looking for the king of their dreams. But who would have thought he'd be right there in that lowly stable instead of a palace?

The King of kings and Lord of lords was born that night in Bethlehem. He came to rule, but He would not take that authority by force. He would simply offer it to those who were willing to enter into His kingdom through a narrow path, a small gate. He would set up His kingdom in the hearts of people, of all places, and He would rule with peace and grace.

I hope you know that King. I hope He sits on His rightful throne in your heart. He is that king we dream of. The one who owns the cattle on a thousand hills, the one who rules with dignity and grace, the one who has a plan and knows how to work that plan. And, sweet dreaming friend, He is the one who is preparing a great feast for His loyal subjects where we will all eat from His table and share in His rejoicing. You are invited to the ball and one day He will come for you, riding on His white horse and clothed in splendor.

That baby in Bethlehem grew up to be a King.