When I returned home from my quick little anniversary trip with my husband yesterday, I was particularly glad to see two things. Both are growing. Both are blooming.

I have three African violet plants on my kitchen counter, each with a different colored bloom. At least I think they each produce different colors. One of them has never bloomed. 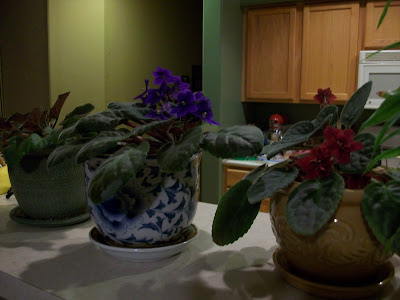 I've had two of the plants for a number of years now and they bloom off and on quite profusely. One is a true purple violet and the other is more of a deep burgandy-purple. They may have a dormant period here and there, but I can always count on them to bloom if I care for them properly. I love my violets. They really brighten my days.

The third plant actually replaced another violet that I'd had for several years, but it never bloomed. Never. I fertilized it and watered it and put it in the right light. I was careful not to move it. I think I even spoke to it a time or two, always encouragingly of course. Well, maybe that last month or two I barked out my disappointment once or twice.

But it never bloomed.


Finally, last May when my parents were here for my son's high school graduation and they were being very generous at Lowe's Home and Garden Center, I took advantage of my Daddy's good nature and asked if he'd buy me a new violet to replace the one that had never bloomed. Of course he did.

And so, since May 2009 I've been waiting for that violet to bloom again. Whenever you move and replant a violet it is normal for it to refuse to bloom for quite a while, but you do want it to eventually cooperate of course. Recently, I've been growing a little frustrated with my new violet, assuming maybe the pot was faulty or something (it was the same one the other non-bloomer had been in). 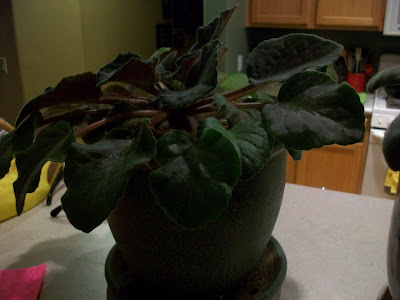 But lo and behold, it has little buds on it! I came home from my trip to find that it is growing and is about to bloom! 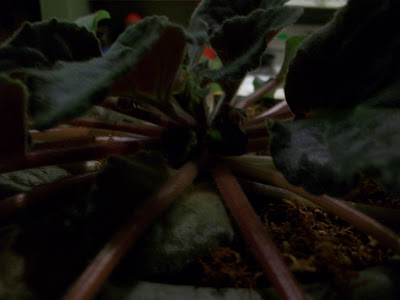 You probably can't even see the little buds in that picture, but believe me, this violet grower can. I've been checking for new growth for months, anticipating it, doing everything I could to cause it to happen. And when I saw those little buds I squealed with delight and brought them to the attention of the rest of my family. They were, of course, so enthusiastic....

And that brings me to the other thing that is blooming.

James and I have gone away for our anniversary for at least five years now. As a pastor of a church he just needs to get out of town occasionally and we've found a quick trip during our anniversary to be one way to accomplish that. And each of those years we've just left our children home alone since they've been, in our eyes, old enough to handle a few days by themselves.

But we've also come home to some doozies. Never any bad misbehavior, but just the normal "he said, she said" or "he did ...., she did...." There have been blazing accusations and flaring tempers, not to mention a very messy house.

But this time we came home to a relatively straight house and Abby was putting the dishes from the dishwasher away as I walked in. Daniel had picked his sister up from school and helped her with her geometry without any squabbles, as far as I could detect. Neither of them reported a single accusation against his or her sibling. In fact, Daniel topped off the evening by lending his sister $20 so she could go out to eat with friends. (He'll probably charge her interest, but at least he gave her the money without any gnashing of teeth or tearing of hair!)

My kids were blooming!

And I'm just as excited about these promising little buds of growth as I am my African violets, more so in fact. Like most parents, I watch persistently for signs of growth and I become discouraged when I don't see them. But one thing I have learned from parenting during these teen years - God is not through with my children. In fact He has barely begun. And He, the Master Gardener, is carefully tending to their growth. Much better than I, He knows when to prune, when to fertilize, when to water, and when to just sit and wait.

And so I've clung to Philippians 1:6 for my children and indeed for myself.


"For I am confident of this very thing,

until the day of Christ Jesus." (Philippians 1:6 NASB)

And then I go on to pray the following verses as well:

"And this I pray, that your love may abound

and all discernment, so that you may approve

the things that are excellent,

in order to be sincere and blameless

until the day of Christ; having been filled

with the fruit of righteousness

which comes through Jesus Christ,

I'm excited about the growth I've seen lately, both in my precious little violets and in my own children. Not only is that growth important and exciting on its own, but it reminds me that God is still at work. It's never too late for Him to move in and change a heart, a behavior, an attitude, or even a violet.

What growth have you seen lately that has inspired you? I'd love to hear about it. Maybe you've seen growth in a spouse, a child, a friend, a plant, or...yourself. Please do tell!